Fog and Rain and Puppies!

Trying to outrun a Taifun is not my brightest idea I guess but I need to arrive in Vladivostok before that fucking storm! Day after tomorrow my ferry leaves for Seoul and if I am not on board I am in trouble AGAIN. This means that I need to ride 630 km in hard rain and storm tomorrow!

This is me at a bus stop in Siberia. 5 minutes after this photo was taken, I was standing there naked, freezing, stomach aching over a pool of blood. Alone. 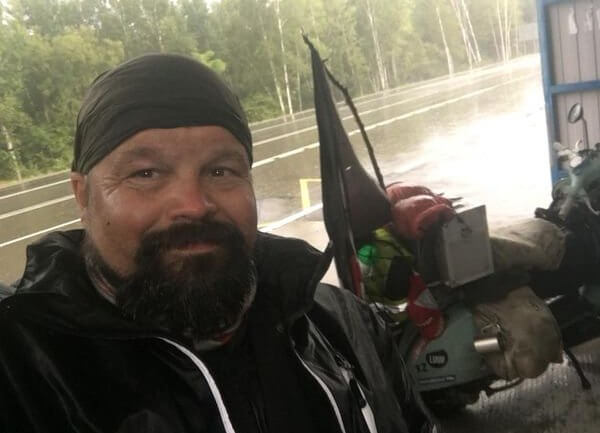 I was asked in several emails how I am holding up.

So here is a bit about my physical and mental state :

How could all this happen!

What the hell was I doing here?
10 days earlier I had gone into a ditch when I blew a tire on a very bad country road and injured my collarbone. An old injury from military times was back. I drowned the strong pain since the fall in ibuprofen at the maximum dose to be able to continue driving.

Two days earlier I met a large family in a gas station. The nice Asian mother not only showed me a video of a big bear that had approached within 20 meters of her car but also told me that a typhoon was racing towards my stage destination Vladivostok. Since then I was racing against a typhoon in heavy rain and wind.
1 day before my rain trousers tore and I drove soaked because also the armor tape did not want to hold and I found no store where they could sell me a new one.
On the same morning at the breakfast, something was probably bad because I had the whole day already stomach pain to the shoulder pain in addition.
Finally, I had to stop at this bus stop because it was raining so hard that even cars stopped. After all, the windshield wipers were not fast enough.
So I was standing there wet and cold with a stomach ache and an injured shoulder at a bus stop in Siberia and suddenly I got terrible cramps and breakfast wanted to come out again. As you know, I always drive in overalls with a vest and rain gear to boot. In 30 seconds I had to get it out and let nature take its course at the bus stop. I looked on the ground and everything was full of blood. Either it was my stomach from the painkillers or hemorrhoid from 16 hours a day in the saddle of the Vespa for 51 days.

Doesn’t that make you want to give up?

That’s what some people asked me.
If you have given up your apartment, quit your job, left your girlfriend, and put in 3 years of preparation and 25,000€ to make a dream come true, with about 260,000 people watching live. Do you give up then or is there only 1 way? To the front!
So I got dressed again and continued towards the typhoon, towards Vladivostok. I rode towards the end of the continent to reach a ship that leaves only every 7 days. I needed to reach South Korea and get a plane to Hawaii. Only one day after the ship leaves, my visa would also expire and I would risk arrest at the border. So I better go full throttle again! Wet, cold but wildly determined. 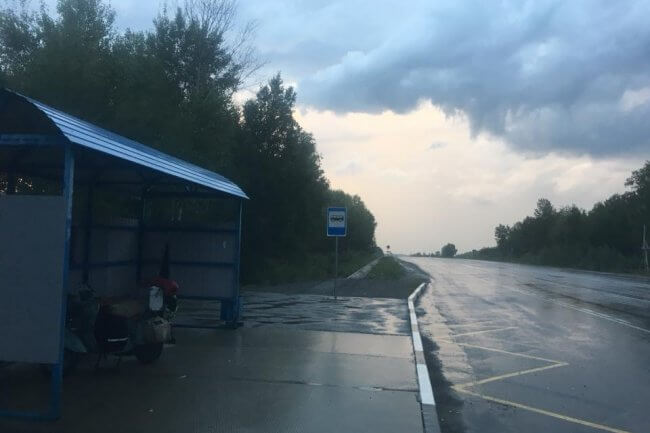 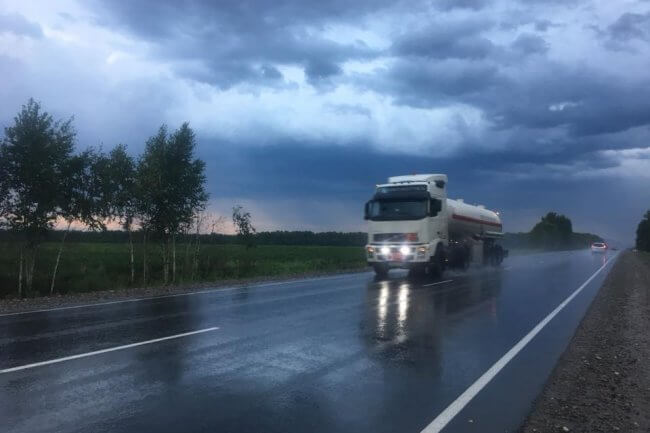 Need to arrive, ship my bike in the morning, and by lunch board a ferry. I still need a huge suitcase or Ice Hockey Bag for my luggage.
I guess when you try something that has never been done then you better expect some pain and suffering. If it would be easy then everybody would try it!

P.S.: At a gas station stop I was playing and feeding some puppies that were just left there in a box. I would have loved to take them all with me, but couldn´t. Luckily later a guy showed up adopting most of them.

P.P.S: Meanwhile, I can smile about it again, because everything worked out and I was back in Spain after 75 days.
That was only one of the many, many things that can happen to you when you go around the world. You can never forget scenes like that. But it was all worth it.