or: Lost in Siberia on a Vespa without a cellphone signal!

Day 45 Chorinsk – Telemba
Day 46 Telemba Chita
So last day’s progress was good and I felt quite confident that I had now my pace and got adjusted to Siberia.
Then Siberia put up its sleeves smiled and said: Little Markus – now is the time for a classic proper ass whooping!
I stood up very early at 6:30 and was highly motivated to get some 600 or so km under my belt. God how little did I expect what came at me then.
I left the small town of Chorinsk and went towards Chita through Romanovka and Telemba. At least that was the plan.
30 km out of the town I met a guy from the guest house the night before in his 4×4 and he told me I am wrong and should turn around because the road will get bumpy. I thought I have seen bumpy. And there was still asphalt. Well bad asphalt but asphalt. I was happy about little traffic ( about 1 car / h ) and no trucks. 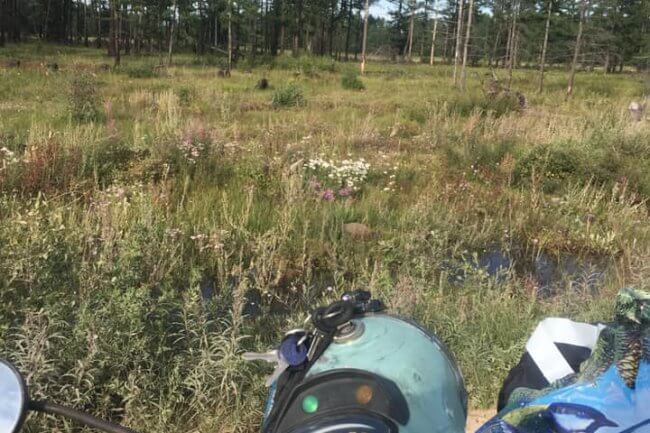 Just 10 minutes later I encountered another of those free-roaming herds of cattle on the road. Usually, they were no problem, because like the camels in Kasachstan they did not know the sound of a two-stroke Vespa Scooter and ran. 80-100 animals stood there but this time not all of them stayed calm or ran. One bull darted at me and I had to open throttle towards him and avoid a crash with him in the last second like a torero. This was fuckin scary and  2 km later I sat down breathing and tried to stop shaking.

Listen to the locals 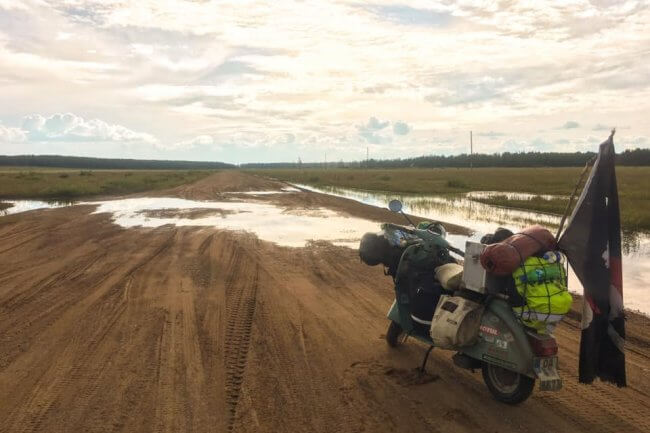 After 20 further km, I already regretted it the first time that I did not listen to that local man! I had an Accident!
My back tire got so hot from the constant strain that it blew and I swerved from one side to the other at high speed and was unable to get back control and ended up crashing in the ditch. My last thought was: Please don’t crash the motor casing. That would mean the end.
I thought I was not injured but have a few scratches. Mainly in my ego. That is what I thought! The shock was pretty harsh and I was laying on my back for a few minutes trying to calm down. My shoulder hurt and my collarbone seemed out of place! Lost a pocket of my vest that was torn as well. So I slowly got up, swearing through my teeth, and started to change the rear tire. It was still very warm. For that, I had to unload and load again half the luggage to get back on the road out of the mud and over the big stones.  For one complete hour, there was no car on that deserted back road. And then one old Lada Niva passed without the person even stopping or slowing down to ask how I am or if I needed help. Luckily Rosinante had very little damage. When I was finished changing the tire and loading again I continued after directly taking a few pain killers.
The collar bone was definitely dislocated. 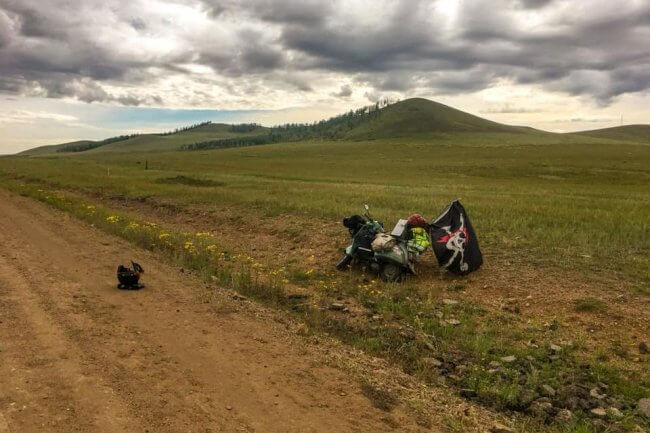 We live where the roads end

Then it got from bad to worse. The road turned into a proper off-road track with massive rain damage, water crossings, damaged bridges, and only washboard, soft sand, and gravel.  After half a day I reached a village 80 km away and thought I am through. Finally in the village, there was some Asphalt again but no Internet. A friendly local invited me to a gas station to have lunch with his whole family. A beautiful experience. They shared all their food and even gave me a tea set and a blue silk scarf as a gift. They said blue stands for wisdom in their religion. I smiled, thanked them, and said: “I can use some wisdom!”
I had lost a lot of time that day and was nervous so I asked how the road will be from now on and I will never forget her words :
„We always say that we live where the roads end.”
I nearly felt like crying.

They also said about 250kms to Chita the next big city. So I started after lunch and made 80 km till 1 h before sunset. But Romanova the village I arrived in after that hard ride was not very friendly. I entered a small shop to get a beer and some bread and ham for dinner and a handful full of drunk men stood in the corner looking at me strangely as if checking out how much work it would be to rob me or if I am eatable.  The woman behind the counter was rather harsh and when I asked her about a guest house she just said in a cold voice ” Niet”. One of the drunk guys approached me outside offering a place to sleep but he also was pretty rude and did not look trustworthy. My gut feeling said – ride on! I continued from Romanova towards Telemba because I had a really bad Vibe about the village and the locals did not look curious or friendly at all and I have been warned several times by bikers about angry local hillbillies that could stab you just because they like your boots (and I like my boots).

Riding on a sand track at night – Lost in Siberia on a Vespa without a cellphone signal! 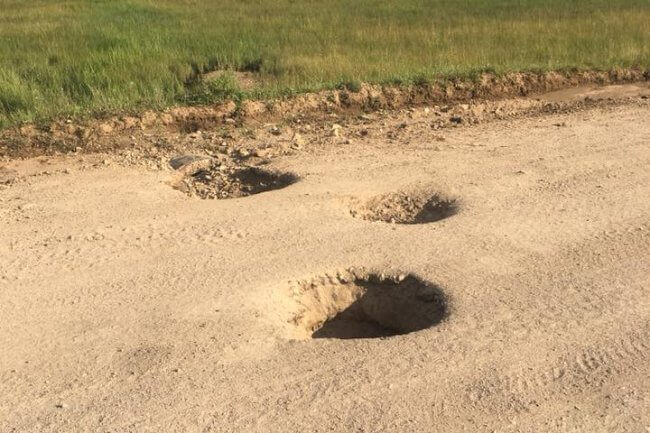 All rest stops along the „Road“ had big warning signs about bears. Left and right of the road were only mud and swamp so no chance to pitch a tent anyways. And the road became worse and worse. My lights were bad but luckily it was possible to avoid the black holes in the white sand when riding. Mostly I had my lights switched off and rode „feeling“ the road and the white sand line. During the night there are some big wood trucks on those roads and they don´t break for anything. So whenever one of them approached me from behind I needed to hide on the side of the road to not get hit and then I had to wait a few minutes with my face mask up till the dust settled again and I could see in the dark. It got very exhausting. I had no Cell signal since Ulan Ude and luckily there was only one road because I was lost on Vespa in Siberia.
Around 22:30 I came to Telemba and was chased by 4 big angry dogs that tried to bite my saddlebags but after 100 ms eventually gave up. I rolled up to a bar and entered Everything else was closed. I entered and they had no Internet again. Surprise! I stood there with my dirty face and tried to explain with my hands and feet to the 2 ladies that I look for a place to sleep. They shook their heads so I thanked them and left the bar.

Outside was already a crowd of locals around my scooter ( mostly teens ) taking pictures and starting to ask 1 million questions that I could not understand. They kept repeating: “Selfie Selfie, Instagram!”  I was surprised because they all had smartphones in a village without running water or cell phone connection or even an asphalt road. They still wanted a picture for their Instagram. So I asked about the Internet again but they said they only upload their stuff once a month when they come to a bigger city.  Crazy World!
When I was finally close to leaving and had explained to most of them my route the 2 ladies came from the bar the younger one held google translate on her phone and she invited me to stay at their „other house“.

Eins, Zwei , Polizei – Or a night to remember! 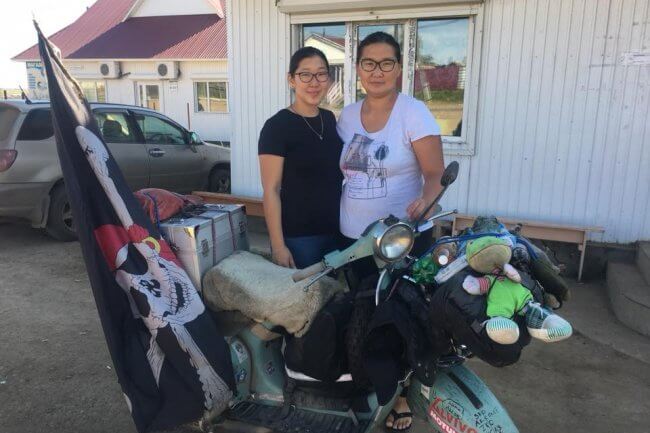 This guest house was a shed with 1 room and 2 old rotten couches in there. But it looked like a dream to me. My hosts also served me free dinner and breakfast. Later that night when the husband came from work he shared a bottle of vodka with me. He came with a drunken Russian colleague. I spoke no Russian and they understood no word of English but they knew three words in German: “Eins, Zwei, Polizei” They kept talking to me in Russian and then always ended their sentences with “Eins, Zwei, Polizei  Nazdrowie”. So after some very long hours and after midnight he finally let me sleep. I went behind the house for the open-air toilet and dropped on the couch. Unfortunately, the night was over very very early, but at least they invited me for pancakes in the cafe.

10 Dishes of food and a wedding room

After Breakfast and a photo together I left and when I  finally arrived for lunch the next day in Chita I entered a restaurant.
It was full of military and construction workers. The owner was a very friendly older lady. She came to my table started a conversation and made me try a lot of local dishes! Actually, her waiters brought 10 or more different plates for me to try. Afterward, she showed me around her premises and into a second house that looked like one of those big Mongolian tents. We entered and there was a nicely furnished room, decorated for weddings. I got nervous for a moment because she had earlier introduced me to her pretty young daughter. But all was good and she only wanted to show round the first foreigner ever in her restaurant.

The beauty of civilization

Luckily they even had a wifi network and the cell phone signal was back again. My phone nearly exploded from the last three days lost without connection. A lot of people were worried because I could not be reached after I left Ulan Ude towards the East.
Then I hit a proper road again. The asphalt was pure joy and in front lay endless soft hills with forest and many many curves. I was back in civilization!
I smiled and continued for the last 2860 km to Vladivostok! But the next surprises were already waiting…
First, you are scared –
Second, you adapt –
Then you cannot get enough of that shit!