I never thought I would have to explain why there is no good comparison between Long Way Round vs. La Vida Vespa! I thought it would be clear to anybody why the two projects are nothing alike and have absolutely different dimensions, but I am often surprised by how little people can relate to the dimension of a project like “La Vida Vespa” and compare them – even Scooterists and Bikers!
And also even on Posts with over 5.000 likes and official media coverage I still had people saying strangeand stupid things like:
“You did not go around the world because you did not go to every country or every continent” or
“It was not long enough because the planet is 40.000kms” or
“I could have done if I would be rich!” or
“It is only a scooter!” 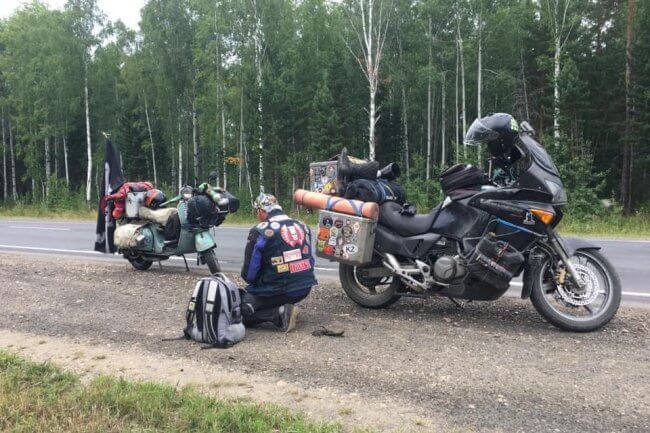 So here is a bit of clarification:

Here is a comparison in Numbers of Long Way Round and La Vida Vespa :

So here is a resume Long Way Round vs. La Vida Vespa:

Long Way Round was a fully sponsored high budget movie production by 2 Actors with a big group for support and filming including technical and medical support. I rode without a support crew or logistical support alone 85% self-funded after I saved and planned 3 years. LWR was a film production that earned the guys very good money while not even paying for gear or bike while I came home broke and without a job or flat or a girlfriend.

I rode twice as many countries and 89 % of their distance on a vehicle with 10 percent of the power, half the fuel range, and half the wheel size and bad breaks. My daily Average riding km was 28% MORE on my Oldtimers than theirs on the brand new BMWs.
Long Way Round was a nice and fun-to-watch TV series and La Vida Vespa was the biggest life adventure of a nobody.
This is not comparable in any dimension or parallel universe but I showed a bit of data.
Around the world on BMW? Hundreds of people.
Around the world on Vespa? Documented less than 10.
In 80 Days solo? 1
Fun Fact: Even in space there have been 650 people so far! 😉
This was not written to criticize Ewan and his Project, but to give a bit of perspective to some critics, haters, show-offs, and jealous people. On this page, I want to show that even a nobody with a small wallet and bike can make his dreams come true and do extraordinary things with enough determination, skills, and creativity. Maybe this inspired some to follow their dreams!