Day 1/80 around the world on Vespa

I started my day by waking up at 6 AM and having some cereal bar next to my Vespa in the Garage of the SC Madrid. I could barely sleep anyway because I was so excited. Today I should start the biggest and most dangerous Vespa adventure of my life so far. Probably not the best start to a 3 months hardcore race around the world, but both presidents had newly born babies at home so I decided to at least have a silent night. I did not know that the toilet flush of all 5 flats above the garage was running through that garage as if it was next to my bed! 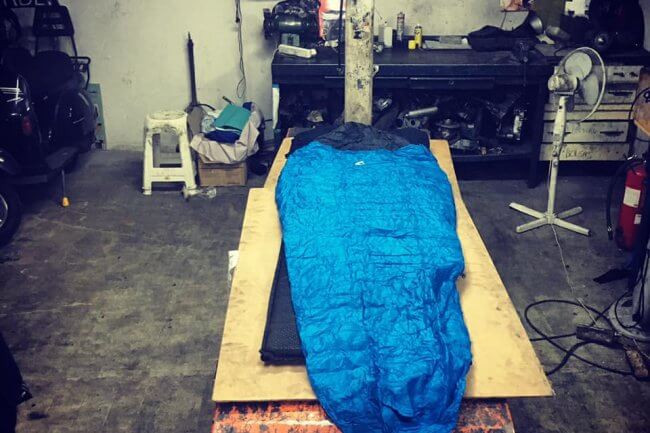 The “Bed” for my last two nights in Madrid

At 7 AM I started packing the bike. I was supposed to meet Santi from SC Madrid at the Train station and ride with him to Kilometro 0 at Puerta del Sol where the start will be with a big group of scooterists.
The official ceremony was busy and one guy even wanted my autograph. I thought he is joking and asked if Santi made a joke with me. Nope . he was drop-dead serious and had printed pictures of me to sign with him. I also gave an interview for a Spanish Oldtimer Magazine about the Intention to do 80 days around the world on my Vespa. Afterward, we went in a filmed Corso through the city, stopping for some coffee and snack. 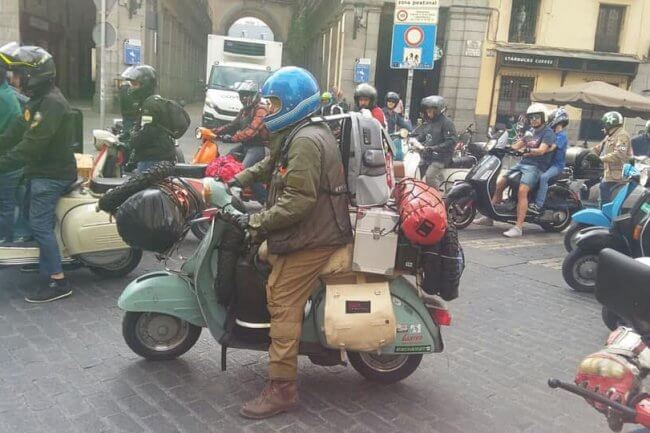 Fully packed and ready to rumble

We then headed towards Pedraza, where some other clubs at the scooter rally Segovia wanted to salute me before I leave for the coast. I did not check before so I did not know that this Village was actually over 100 km in the wrong direction for me. Special Spanish Scooterist Humour! On my way there I had my first loss. A part of my luggage rack fell off so on-site I had to improvise with rubber bands that the group organized for me. We had a laugh about it. 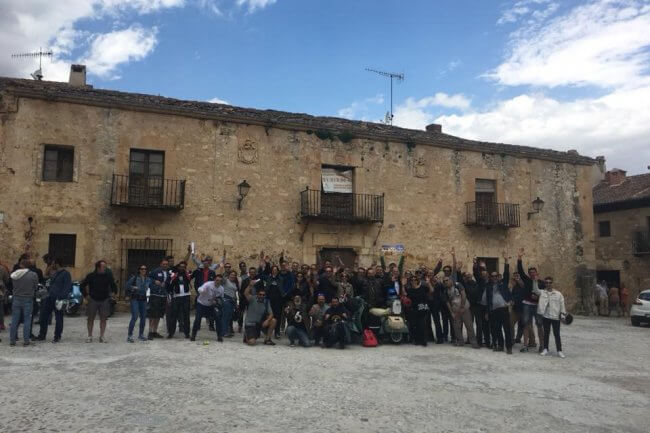 My Farewells in Pedraza

The Clubs gave me a very warm welcome and banners, stickers, and such were exchanged. Some followed my trips since I started in 2014. I received a bottle of nice wine and whiskey for my trip. Not that I knew where to still put those bottles without damaging them. 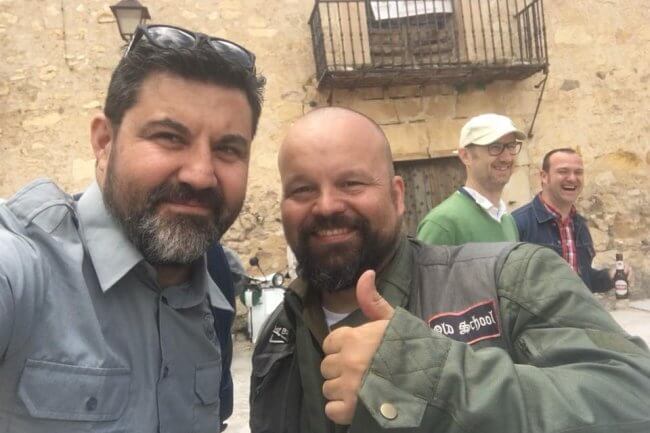 My friend Santi with me in Pedraza

Then I finally headed towards the coast in the east. I continued alone towards San Juan del Moro to meet with Manuel Martin Rubio and his lovely wife. They offered me shelter for the night. The day seemed endless because in the morning temperatures were still ok, but after lunch, it became very very hot. In the wide-open spaces around Teruel it became unbearable with all my gear.
Once I even ran out of gas just about 500 m from a gas station. I did not want to access my extra gas can so I pushed the heavy-loaded scooter up the hill. I was sweating like a pig. Due to the detour, my first-day ride was 675 km and 12 hours long. What a start.
I arrived a bit embarrassed at 23.30 at Manuels´house because I kept them awake that late. They had a nice meal for me and we shared one drink and then I found a comfy bed.
I needed that. What a first day!