Day 50/80 around the world – Air Leaks, Hangover and Mafia Bosses

So after a good day on a Vespa Tour often comes a less good one!

Left this morning with a massive hangover because I gave in to great Russian hospitality. Loads of good food and I passed out and cannot remember anything after the second shot of Siberian moonshine! I continued my Vespa tour very early in the morning and all over the place were still passed out bikers laying on the ground. they did not even notice me leave the place!
I left town and all the time there was wind from the front that is already getting stronger and stronger because of that Typhoon that is heading towards Vladivostok.
After a few km, I had a soft seizure. I checked and saw the Spark plug was loose so I thought that might have caused it.
After a few more km it seized another time and the Spark Plug which was too rich all the time is now too lean again.
So I made it slowly into a Gas station and started checking the carburetor. tightened the Cylinder Head and the CDi was changed (maybe causes wrong ignition timing). In the process, I did the necessary oil change and cleaned all up. I figured that my exhaust might also be part of the problem. The SIP Road is battered from the many full-throttle km and does not hold properly anymore. I tried a fix with a cut Coca-Cola Can ( old school Classic ) and will check it again tomorrow. 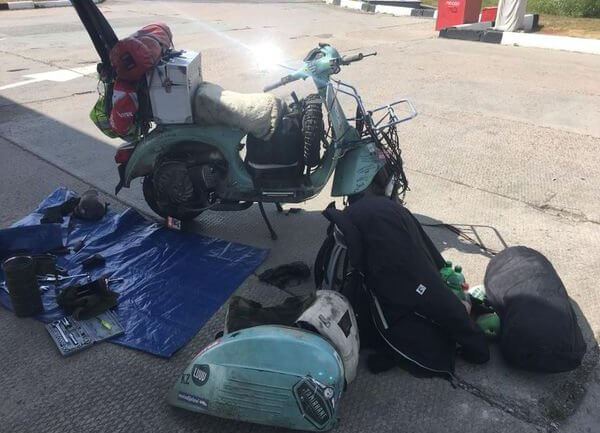 I left the gas station after a very long conversation with a Russian Ex-Soldier / Mafia Boss. He arrived there in a black SUV with tinted windows and two bodyguards in the front with sunglasses. The little guy was very drunk and asked me where I came from and if I needed help. Unfortunately, he insisted to help me in any way because his grandpa had killed my grandpa in the second world war ( he believed ). In the end, he was happy to buy me a burger and a coffee. And I was happy when he finally left again. This all took 2 hours because he was very very persistent and his bodyguards looked quite grim. I did not wanna risk getting beaten up by them because of a fight with their drunk boss.
After a few km, I still noticed the motor not running well so I stopped again. I up jetted to compensate for the air leak and kept going.
After the next gas station, I noticed that my rear tire felt wobbly but before I could find a place to check, it blew out at 70 km/h. That was the third time in my life! This time I could avoid a crash but nearly swerved into oncoming traffic. So I unloaded the bike completely and put now a bad inflated Enduro Spare wheel and had to go superslow for about 60 km till I finally found a gas station with air. I carry a foot pump but that was not good enough to get the right tire pressure. 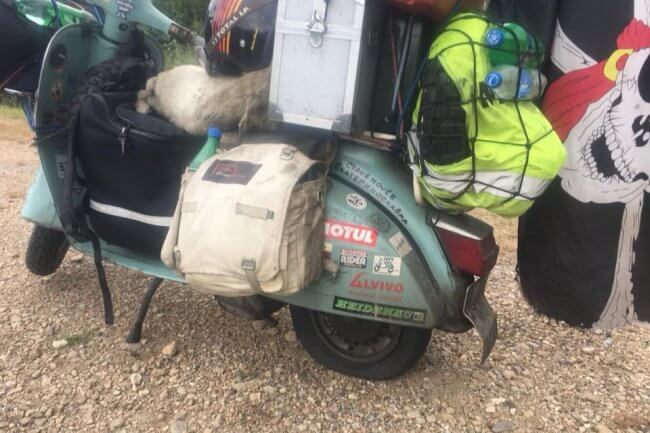 I had to stop for the day after only 290 km and sleep in a noisy gas station under a lamp. So I parked Rosinante under a Camera and rolled out the mattress next to her. It was necessary to sleep in my sleeping bag next to my scooter because I did not want to risk losing my tent if some drunk or armed person gives me trouble at the gas station. It was a bad night because I slept with one eye open all the time and there were loads of big trucks at that gas station refilling. I hope for a better day tomorrow. About 1100 left till Vladivostok and the Typhoon gets there Tuesday. Gives me 2 days with wind in the face to get there before the storm.
And another rattling sound came up just before the last stop. So tomorrow more maintenance. I hope it is not the seal on the rear bearing that causes all that. Keep your fingers crossed, please. I am soooo close!
Today would have been my planned arrival in Vladivostok but, my boat leaves on the 22nd if it can leave because of the storm.  If that fails, I have to fly out from somewhere else and then to San Diego. That is going to be a close call.